Node-Red is a node application and before you Install node red you will need to first install node. Here are the instructions:

Then you can Install node red on Windows and Linux (including raspberry pi) using:

Using the -g option adds the node-red command to your path. See the  documentation.for more details.

You may need to upgrade node-red which you can do by doing an install using npm but you will need to install npm first. This you can do using:

Note: npm install failed on my pi and I had to use this command first:

You can check the versions of npm,node and node-red using:

However Raspberry pi provide an install script which can be used for installing and upgrading node-red on the pi and recommend using it. The procedure for download and using it are here.

I recommend you copy the command from the page and paste it into your command prompt.

To start node red on Windows go to a command prompt and type:

if you installed node-red using the -g option.
Note: you may need to change into the node directory.

If it fails you can use:

Firstly running node by typing node may not work as apparently node is a short cut to nodejs and the short cut may not be present.

In addition there appears to be a naming conflict with another package. see this explanation

The screen shot show how to create the symbolic link

Now that node is working you can run node-red.

Type node-red at the command prompt

. If that doesn’t work it’s probably because the link isn’t configured as shown above. You can try the alternative.

At the top of the screen you can see the version of node and node-red that you are using and the location of the flows..

At the bottom of the screen it tells you the url to use to access the node-red web admin interface which you use to create your flows.

This console stays open and you will find it useful as when you start creating flows as you will see log information appearing there.

Starting Node-Red as a Service

On Raspberry pi you can also start node-red using:
node-red-start

which starts node-red as daemon.

to stop it use:
node-red-stop

If it isn’t already configured you can automatically start node-red on system start by using the command:

and disable it using:

When running on start up you can stop it using the node-red-stop command and restart using node-red-start command.

If you want to load node-red on startup with a different settings file than the settings.js you will need to edit the file /lib/systemd/system/nodered.service.

un-comment the line ExecStart if not already done and the Environment=”NODE_RED_OTPIONS=-v” line to something like:

When node-red starts it first loads the settings file settings.js which is used to set the admin port, user directory, and flows file etc. The start process is illustrated below. 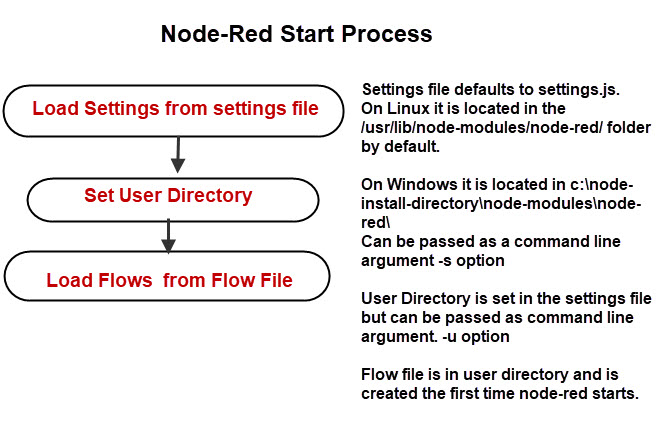 On Linux the settings.js file is copied from the /usr/lib/node-modules/node-red/ folder to your .node-red folder in your home directory when you start node-red, and there is no settings.js file present.

You can create your own settings file and customise it either by copying the existing file or using the file available from Github here.

To use your own settings file use the -s switch when starting node-red e.g.

Important -If you place a settings.js in the .node-red folder then that will be used by default.

The documentation here takes your through the settings file in detail.

On both Windows and Linux user settings and flows are stored in the .node-red folder. This folder is located in the users home folder.

E.G For user steve on windows and on Linux

Node red flows are stored in a .json file in the .node-red folder.

New modules that you install are installed under the node_modules folder in the user directory which by default is .node-red.

Node red has a very limited number of command line options. Use:

The -p switch will let you change the port that node-red admin interface uses.

You can use this option to quickly and easily run multiple instances of node-red.

In version .20 a safe mode has been added to allow you to start node-red without deploying any flows.

This is very useful if a flow is stopping node-red from running.

It is possible to run multiple node-red instances on a single machine.

To do that you will need to give each instance a different admin port and also a different user directory or alternatively create and use a new settings file.

You can do this using the -p and -u switches when starting node-red e.g

the admin port is 1881 and the user directory is user1 the flow file name uses the default flow name.

Note: If you don’t use a different user directory then they will all use the same flows file which could result in conflicts.

If you create a new settings file e,g mysettings.js you can then edit the line starting with flows and remove the two forward slashes.

You then use the command:

to start the flow.

You could also use the command

to use a different port.

if you feel that you have learned a lot from this site and would like to make a contribution, then you can do so by clicking here.