When data is read from a file or network it is read byte by byte into a data buffer.

To work with binary data we will need access to these buffers.

To work with buffers in node and node-red we use the buffer object.

The following screen shot of the node command line shows how we work with characters using the buffer object.

The first thing we need to do is create a buffer. This can be done in a number of ways:

Create a buffer from a string.

Create a buffer from an array of numbers

Notice the difference between numbers and strings and numbers as numbers.

Create an empty buffer of 10 bytes and Initialise it.

If you read the tutorial on data and character encoding you will see that Characters and numbers e.g A and 1 are represented as bytes by encoding them.

In the early days of computing ASCII was the encoding standard, but due to the lack of support for foreign characters it has been replaced by utf-8.

Below is a screen shot showing a partial ASCII table for the numbers 0-9. 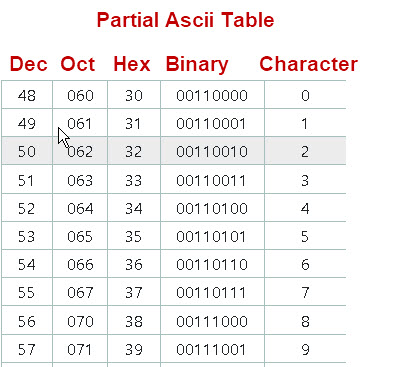 When we use the Buffer.from method to create a buffer from a string then we can also specify an encoding scheme, utf-8 is the default.

Now utf-8 uses 1 to 4 bytes to encode an character whereas ASCII only uses 1 byte.

However when we encode the characters ‘abcde’ we only have 5 bytes.

This is because the English characters are the same in ASCII as utf-8.

However what happens if we encode foreign language characters line the French é ?

In the above screen below we see for English characters the encoding is the same in ASCII as UTF-8 and uses a single byte.

However when encoding the French é UTF-8 uses 2 bytes and ASCII can’t encode it and so substitutes the question mark character. 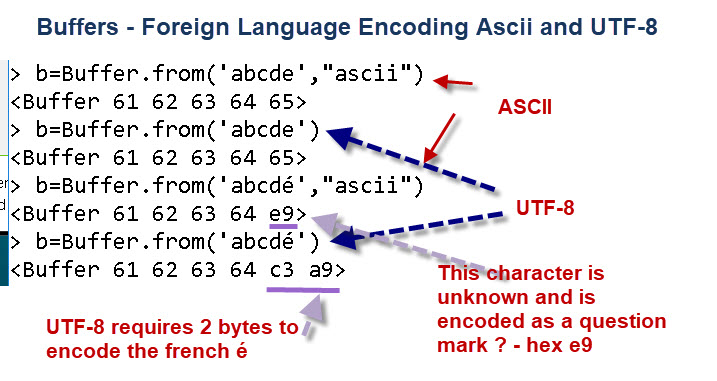 When reading in data from the network or from a file it is important to know what type of data we are working with.

If it is string data then what is the encoding that was used. If we take our simple example of  abcdé  encoded as UTF-8.

If we read it using the toString() method, and decode it as ASCII this is what we get: 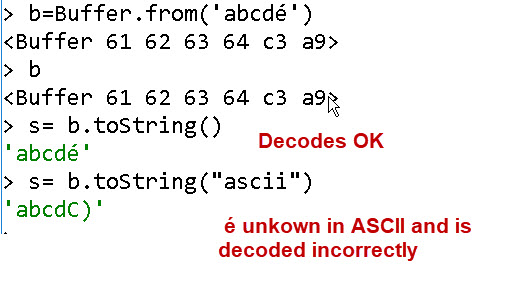 You will notice that ASCII uses 1 byte per character the French character é is encoded as C3 A9.

It is decoded incorrectly in ASCII as C).

If you look at the file read node you will see that there are 4 options. of how the read presents the data to your flow. They are:

The first and second options are the most common as files normally contain text data.

If the data in the file isn’t text data or not encoded as utf8 then the single utf8 and 1 msg per line options won’t work as with these options the data is read in, and decoded using utf8 into characters.

The third and forth options are for when the file contains binary data or text data encoded in another format other than utf8 or ASCII..

These options reads the data into you script/flow without any interpretation i.e as raw data.

In the video below I cover the above and also show you how to use Buffers in node-red to read text data from a file.

Encoding and Decoding Integers and Floats

When working with machines you will often be required to encode and decode integer and float data, modbus is a good example.

Early computers used 16 bits to represent an Integer and 32 bits for a floating point number.

Today they can be much larger put the process is the same.

The image below shows a 16 bit Integer and how it is organised into bytes: 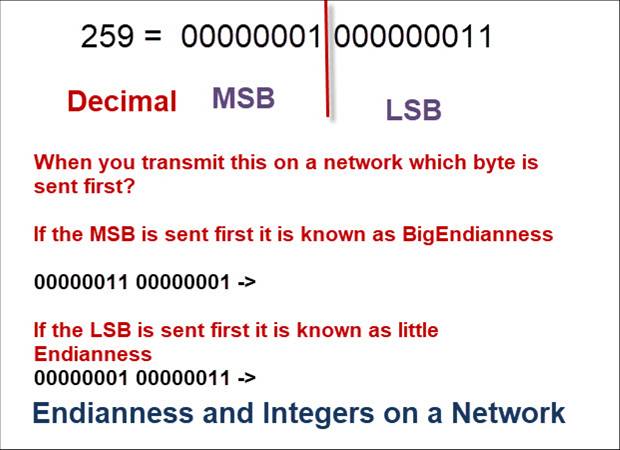 This is know as endianness and is discussed in the video.

Creating a 2 byte buffer from an Integer (16 bits)

Creating a 4 byte buffer from an Integer (16 bits)

Creating a 16 bit Integer from a 2 byte buffer

We start with our 2 byte buffer containing a 16 bit integer and then we create the integer using the read method.

Creating a 4 byte buffer from an Float (32 bits)

Creating a 32 bit Float from a 4 byte buffer

We start with our 4 byte buffer containing a 32 bit Float and then we create the float using the read method.