However today working with networking protocols and network programming you will come across a variety of data and character encoding schemes.

In this tutorial we will look at basic encoding schemes used on computers and in the second part of the tutorial we look at how data is sent over a network.

When storing and transmitting data you will need to represent Following Data Types:

So how does a computer store the letter A or the number 1?

How do you transmit the letter A etc to another machine across a network?

To store text as binary data, you must specify an encoding for that text.

Computers systems can use a variety of character encoding schemes.

As long as the data stays on the computer it is really unimportant how it is encoded.

However to transfer data between systems a standard encoding scheme needs to be adopted.

In 1968 the ASCII (American Standard Code for Information Interchange) was adopted as a standard for encoding text for data exchange.

ASCII is an American standard as designed to encode English characters and punctuation as used on typewriters and teletypes of that era (1960s).

ASCII uses 8 bits although only 7 bits are actually used.

Because ASCII was developed at the time Teletype devices were in operation it also contains control codes designed to control the teletype device.

The Table below show a summary of the code allocation.

Because ASCII cannot encode characters like the pound sign £ or common characters found in German and other European languages various extensions were developed.

These extensions kept the ASCII character set and used the unused portion of the address space and control codes for additional characters.

Windows 1252 and 7 bit ASCII were the most widely used encoding schemes until 2008 when UTF-8 Became the most common.

ISO-8859 is An 8 bit character encoding that extends the 7 bit ASCII encoding scheme and is used to encode most European Languages. See wiki for details.

ISO-8859-1 also know as Latin-1 is the most widely used as it can be used for most of the common European languages e.g German, Italian, Spanish, French etc.

Because of the need to encode foreign language symbols and other graphic characters the Unicode character set and encoding schemes were developed.

The most common encoding schemes are :

UTF-8 is the most commonly used encoding scheme used on today’s computer systems and computer networks.

It is a variable width encoding scheme and was designed to be fully backwards compatible with ASCII. It uses 1 to 4 bytes. – wiki

The distinction between the two isn’t always clear and the terms tend to be used interchangeable.

A character set is a list of characters whereas an encoding scheme is how they are represented in binary.

This is best seen with Unicode.

The encoding schemes UTF-8, UTF-16 and UTF-32 use the Unicode character set but encode the characters differently.

ASCII is a character set and encoding scheme.

The byte order mark (BOM) is a Unicode character, U+FEFF that appears as a magic number at the start of a text stream and can signal several things to a program consuming the text: –Wiki

The following table, taken from Wiki, shows this.

Generally most editors handle the BOM correctly and it isn’t displayed.

Microsoft software like Notepad add a BOM when saving data as UTF-8 and cannot interpret text without a BOM unless it is pure ASCII.

The screenshot below shows a simple text file containing the text TEST encoded as UTF-8 in notepad: 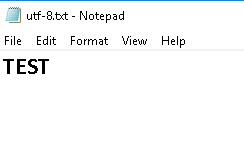 You should notice that the BOM characters are not visible.

Below is the output of a simple python program that displays the contents of a file containing the characters TEST (4 characters) stored as ASCII, UTF-8, UTF-16-BE and UTF-16-LE 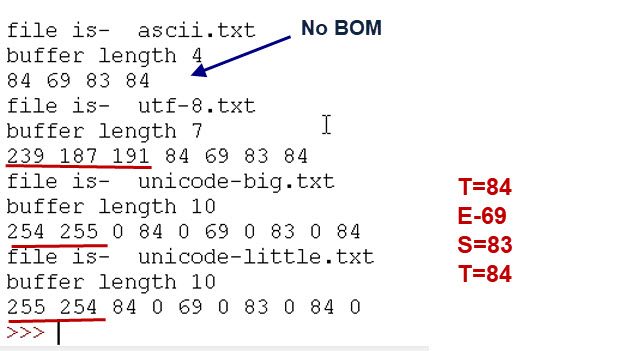 Q-How do I know what character encoding a file uses?

A- Normally you don’t but some text editors like notepad++ will display the encoding. If you receive a file that is encoded using a different encoding than expected then you may get an error when trying to read it.

Q- My file is in ASCII but It decodes ok using UTF-8 decoder. Why is that?

A- Because UTF-8 is backwards compatible with ASCII.

Note: Because UTF-16 and UTF-32 use 2 byte or 4 byte integers the following applies to text encoding using them

The number of bytes allocated to an Integer or float is system dependent.

Because they use several bytes then several questions arise:

The illustration below using python to show the integer 16 represented as 4 bytes using big and little endian byte order.

Network Byte Order refers to how bytes are arranged when sending data over a network. ( TCP/IP  is generally Big Endian ).

This means most significant byte is sent first.

System or Host Byte Order refers to how bytes are arranged when stored in memory on the host system.