In this tutorial we will take a more detailed look at the MQTT protocol, and how MQTT messages or packets are formatted.

We will be looking at:

MQTT is a binary based protocol were the control elements are binary bytes and not text strings.

That means each command has an associated acknowledgement. 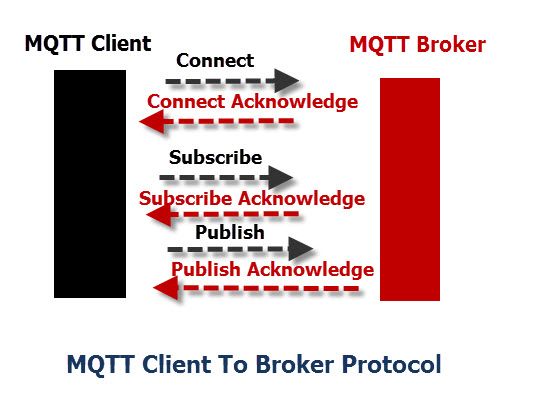 The Payload excluding MQTT protocol information like Client ID etc is binary data and the content and format is application specific. 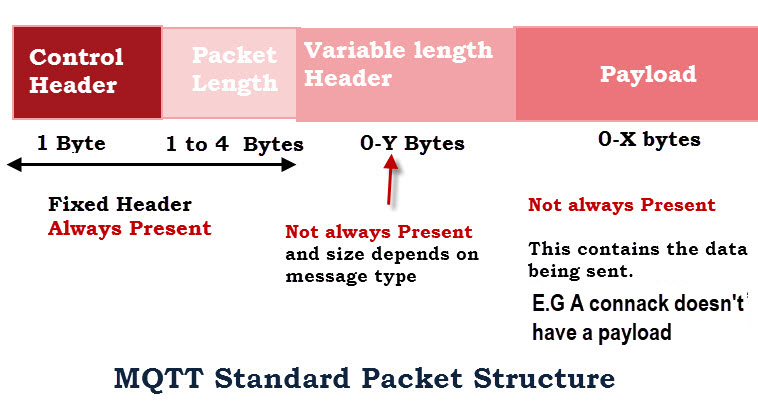 The fixed header field consists of the control field and the variable length packet length field.

The minimum size of the packet length field is 1 byte which is for messages with a total length less than 127 bytes.(not including control and length fields).

Note: 7 bits are used with the 8th bit being a continuation bit.

The minimum packet size is just 2 bytes with a single byte control field and a single byte packet length field. E.g the disconnect message is only 2 bytes. 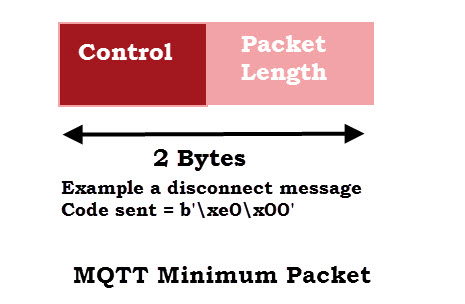 The 8 bit control field is the first byte of the 2 byte fixed header. It is divided into two 4 bit fields,and contains all of the protocol commands and responses.

The first 4 Most significant bits are the command or message type field and the other 4 bits are used as control flags. 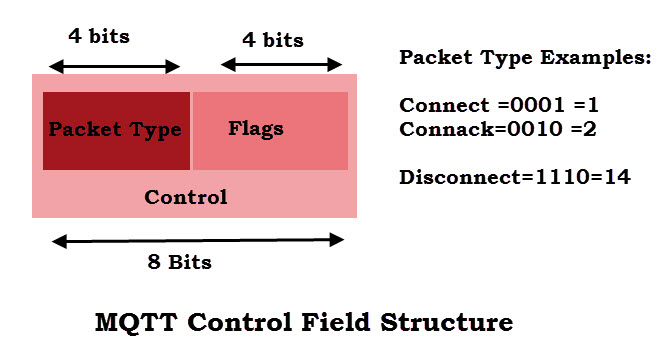 The table below is taken from the MQTT 3.1.1 specification and shows a sample of MQTT commands, and their associated codes.

Because they are the most significant part of an 8 bit byte field I have also shown their byte values in decimal as they would appear in the data packet. 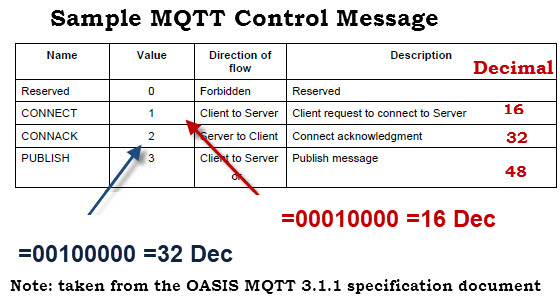 Although there are 16 possible flags very few are actually used.

The publish message makes the most use of these flags as shown in the table below: 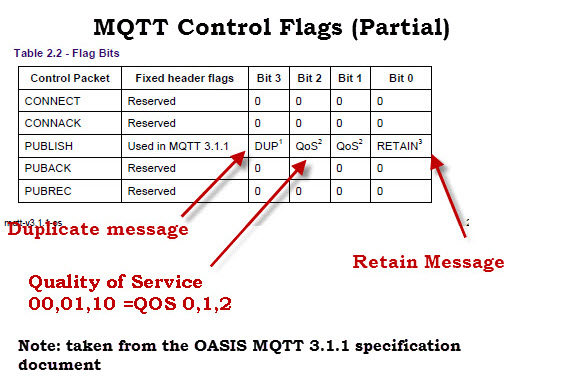 QOS Flags are used when publishing and indicate the QOS level -0,1,2

This is of variable length between 1 and 4 bytes. Each byte uses 7 bits for the length with the MSB used as a continuation flag.

The remaining length is the number of bytes following the length field, includes variable length header and payload as illustrated below: 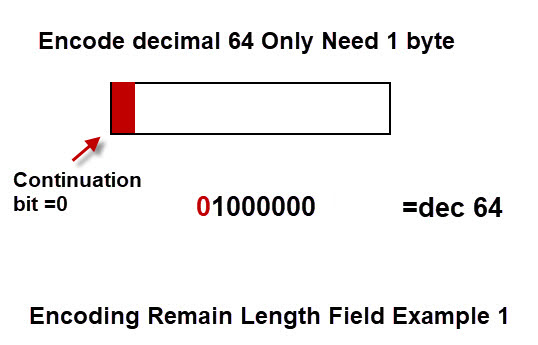 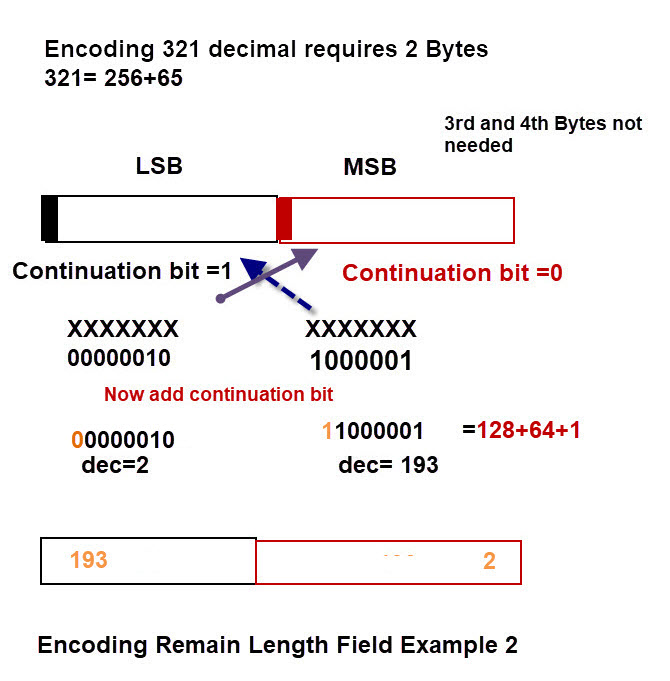 As mentioned previously the variable length header field is not always present in an MQTT message.

Certain MQTT message types or commands require the use of this field to carry additional control information.

The variable length header field is similar, but not the same for all message types.

As an illustration we will now look at the packet details for a connect message.

Below is a real client connection and disconnect example showing the actual byte values for the sent and received data. 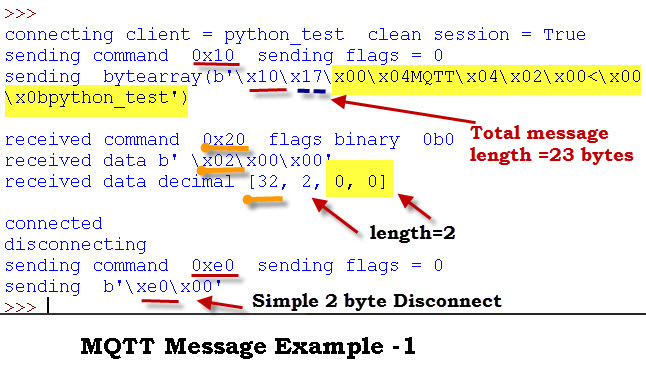 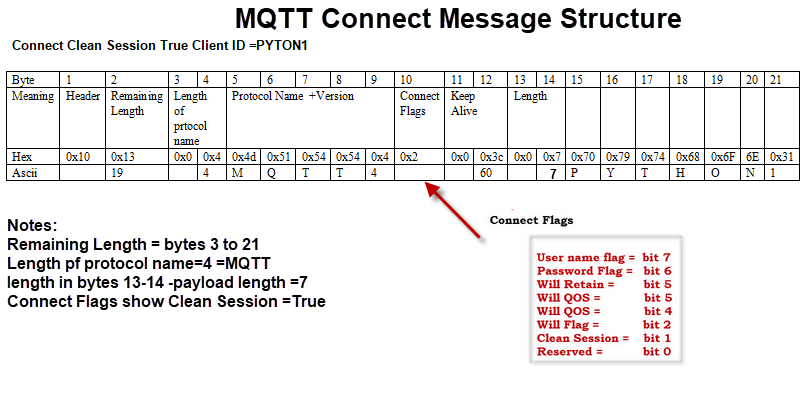 In response to a reader question regarding TCP protocol I created this screen shot taken from wireshark.

It shows an MQTT client connecting and publishing (QOS 1). You can clearly see the ACK packets which have a total packet length of 58 bytes.

We know that ACK packets are 2 bytes.

Therefore the TCP packet without MQTT is around 56 bytes.

What is also interesting to note, and something I hadn’t thought of until I did the packet capture, is that each MQTT command or response will get a TCP ACK and maybe also an MQTT ACK.

If you look at the screenshot you can the MQTT connection get a TCP ACK response and an MQTT Connect ACK response.

To produce the screen shots showing the bytes I modified the original client and placed it in the same folder as the normal client. 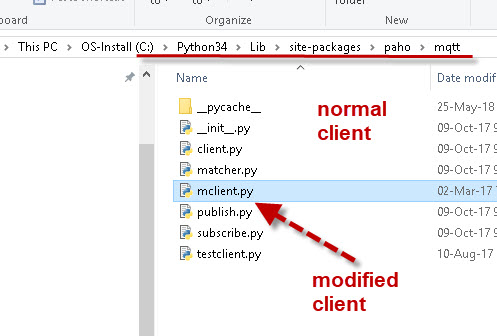 To use it I changed the import from