Callbacks are functions that are called in response to an event.

The events and callbacks for the Paho MQTT client are as follows:

However; it does provide a mechanism to set them.

To use a callback you need to do two things

As an example we will use the on_connect callback.

First I create my function. I’ve called it on_connect but I could have called it anything I wanted.

Here is the function.

The function simply logs a message, and sets a flag.

Now to associate my function with the On_connect callback I use the following:

Note: If my function had been called myfunction then I would use the following:

Callbacks and the Client Loop

Callbacks are dependent on the client loop as without the loop the callbacks aren’t triggered.

Below is the code of a simple python script that creates a connection and then waits in a loop for the on_connect callback to be triggered.

The on_connect callback then sets the flag that terminates the loop and the script ends.

This means that if the callback isn’t processed then the while loop never ends as we shall see later. 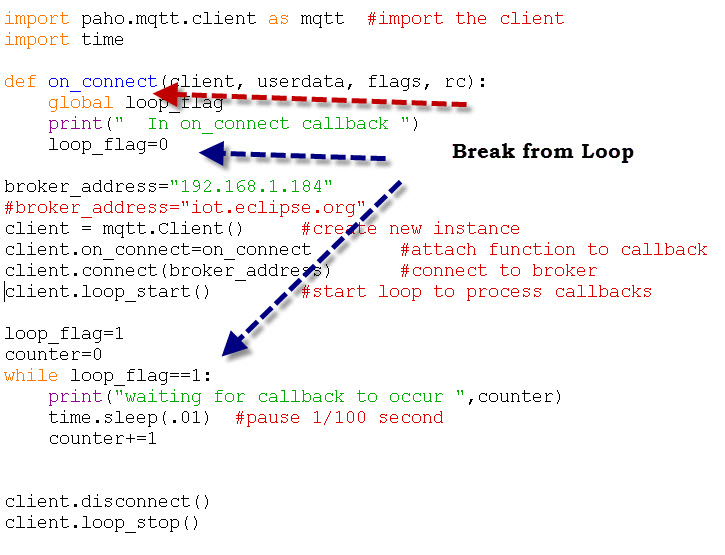 Here is the output generated by the script. 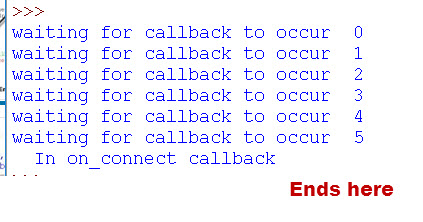 In the script above the client..loop_start() method starts a loop to process callbacks.

So let’s run the above script again, but this time I won’t start the loop. To do that I simply comment out the client.start_loop() line.

Here is what happens when I run the script. 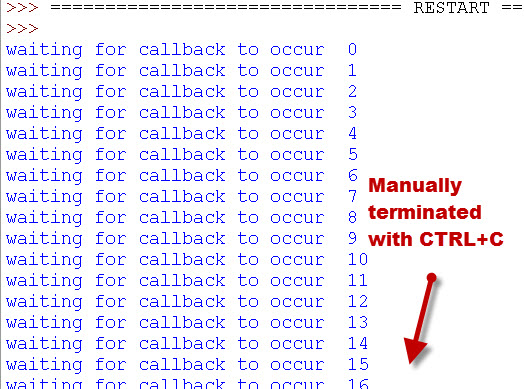 You can see that I had to manually terminate the script as it never processed the callback, and the callback is what  terminates the while loop. You can download this script below:

If you dig into the Client code you will find the code for the Connect acknowledge message.

When the client receives a CONNACK message the callback is triggered if it exists.

Here is the relevant section of the code. (around line 276) 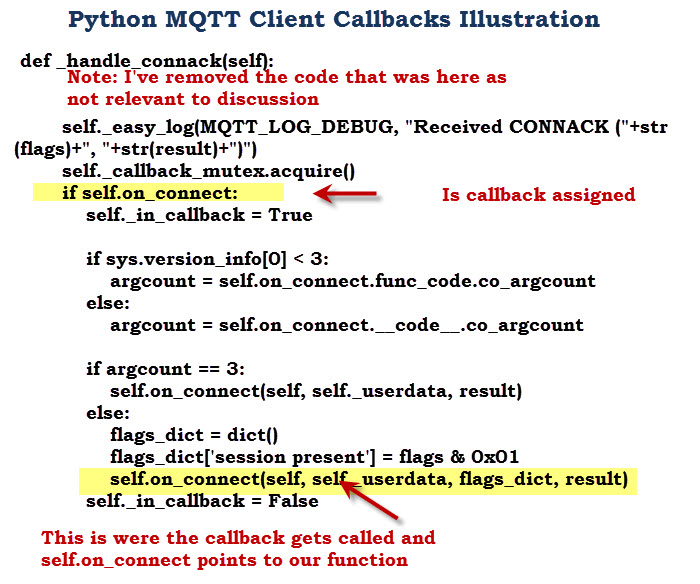 Notice the if on_connect statement. This is what checks for the callback, and if it exists it calls the callback- self.on_connect().

The self.on_connect function is the function we assigned earlier using.

You should see from the code that the function call passes several arguments, and so the function we create needs to be able to handle those arguments.

If you look back at the function I created you can see that it handles 4 arguments. The documentation has a description of those arguments

If you use the loop_start() or loop_forever functions then the loop runs in a separate thread, and it is the loop that processes the incoming and outgoing messages.

In this case the callbacks can occur any time in your script and are asynchronous.

Due to the way they operate It is not possible to return values from a callback using the standard return command.

Therefore if you need to get status information from a callback you need to use some form of global variable in the callback.

You have several options available:

If you refer back to the on_connect call back example I used the connected_flag which is a property of the client object.

Because the client object is available throughout the script it can be accessed anywhere in the script.

So in the main script I use:

Which waits for the connection to be established before proceeding.

To access received messages I tend to use a message queue which is thread safe, but you can also use a simple list.

To use a queue you need to import the module and create a queue
:

If I run the example script you see the following: 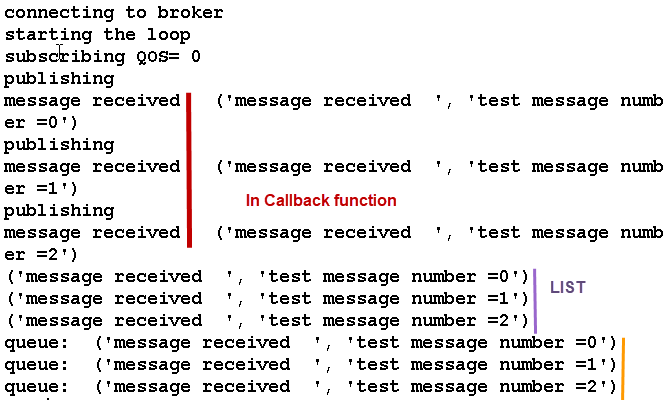 The demo script for processing messages in the callback is here:

Q- My callback is not being triggered?

A- Have you assigned the function to the Callback? Are you running a loop for that client?

Q-My callback returns a value but I don’t see it?

A- Because of the asynchronous nature of callbacks it doesn’t make sense to return a value from them.