In this tutorial I want to talk about the pros and cons of queueing or buffering messages on an MQTT network.

I want to start by discussing points of connection failure and the affects of failure  by using the reference diagram below: 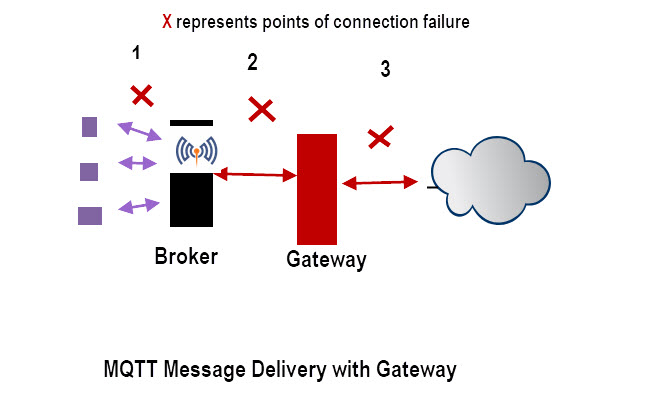 In the above configuration we have sensors connecting to a local MQTT broker and a Gateway responsible for sending MQTT data to the cloud for storage/processing.

In this tutorial we will focus on connection failure.

A network failure can be detected almost immediately in some circumstances, but usually relies on the keep alive mechanism which is 60 secs by default.

So a network failure should definitely be detected in 60*1.5 =90secs.

If we want it shorter then we decrease the keep alive interval or use a different detection mechanism outside of MQTT e.g a network ping.

Once we are ware of a network failure we then need to decide on a course of action which generally boils down to do we hold (buffer) messages or not.

MQTT provides 3 QOS levels which can be used to guarantee message delivery .

Although using QOS of 1 or 2 will guarantee message delivery in the case of a short break in the network, what happens for an extended break or a break with a high message throughput?

If the network connection fails then the client needs to buffer the messages until it is restored.

Message buffering is done in memory and most clients will buffer or queue messages by default.

The client will usually have a setting that governs buffering and the python client defaults to unlimited, and so does the node-red client.

That doesn’t mean that all messages will be queued as queueing will eventually fail as the memory is consumed.

When this buffer is full the client has no option but to overwrite existing messages or discard new messages.

You should be aware that small clients implemented on sensors will have very little buffering capability.

If the network is down for a very short time (seconds not minutes) then holding messages isn’t really a problem as they will be sent with a short delay.

However if it is down for minutes or hours does the application receiving the data really need to receive those messages or can it safely skip them?

As an example lets assume we have 100 sensors sending temperature measurements every second to a gateway.

Once restored we then need to send and process 30000 messages.

These messages would have priority over new incoming messages meaning there would be even more of a delay before the application was receiving up to date data, and not historical data.

The decision on whether or not to buffer messages cannot be taken without regard to the applications that are consuming those messages.

With MQTT you can have multiple consumers of the sensor data, and so if you take an example of a data logging consumer and an alarm dashboard then clearly the logger would require historical data whereas the alarm dashboard doesn’t.

This is shown in the diagram below, and if we assume that the sensors are MQTT clients that can buffer data: 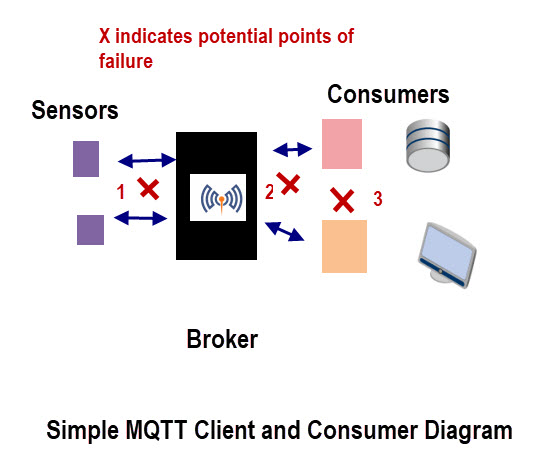 Therefore not sending all messages will impact the data logging but not the alarm dashboard.

So even though MQTT allows multiple consumers of the data it also means that you need to take this in mind when publishing the data.

In the simple diagram above the MQTT broker is capable of buffering data and so probably are the sensors however in both case buffering will be very limited and only suitable for small outages.

In the above diagram a failure  of the network at point 2 would mean that the broker needs to buffer messages. The default for mosquitto is 1000 messages.

A client sending with QOS of 1 or 2 will detect it immediately as it doesn’t receive a PUBACK.

Not receiving a PUBACK means that the message is queued, but a connection failure isn’t logged.

Clients will work differently and so it is important to be aware of how your client reacts to a connection failure. The diagram below illustrates this. 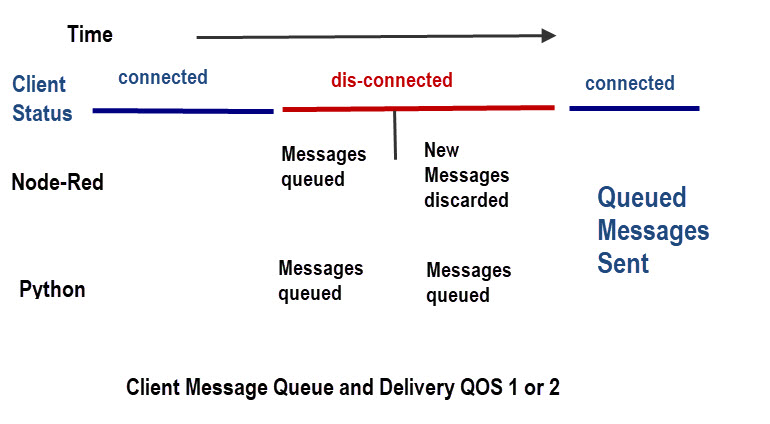 With a Python client the client queues messages for transmission even after it has detected a connection failure.

With node-red the client queues messages until it detects the connection failure after which it discards new incoming messages.

This means that with node-red we need to add an extra queue if we want to keep all messages until the connection is re-established.

A common network configuration is shown in the diagram below. 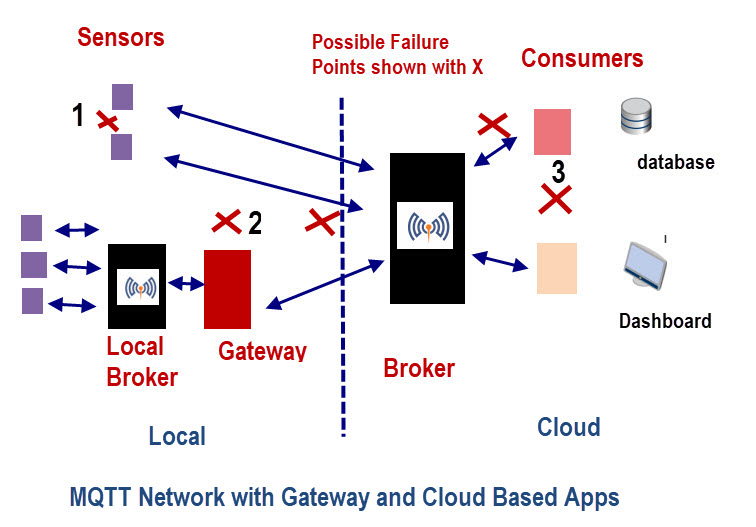 In the diagram we have a local broker and a cloud based broker. Generally MQTT data will be sent to the cloud via the gateway although direct connection is possible.

The gateway could a raspberry pi running node-red or any other application but it’s job is to send MQTT messages from the local network to the cloud.

Therefore out main concern is what happens if this connection fails?

Because we have two consumers with different data requirements an option in this scenario is to send sensor data in real time and don’t worry about failure and this would suit the dashboard/alarm consumer.

We could also store send sensor data it in a local file and send it over a different stream (topic) periodically during the day.

MQTT applications/consumers have different data requirements and this you must consider when deciding whether or not to buffer MQTT messages especially over a long period.

Simply setting the QOS to 1 on all connections is usually not a suitable choice.

Personally I would use 0 by default and 1 when really needed and aware of the potential problems.

Adding a local Gateway device allows more possibilities and should be considered.

This tutorial attempted to give an overview of potential problems arising from using QOS of 1 and queuing message for guaranteed delivery. As such I would welcome feedback based on your own experince.