The MQTT-SN client used here is the client from the RSMB source files but upgraded to python 3, and modified to work in a similar fashion to the Paho MQTT client.

I created it so that I could learn more about MQTT-SN and you should note it is still a work in progress.

I would not recommend it in a production environment and would be grateful if you would let me know of any problems with it.

Downloads are at the end.

The client consists of 4 files.

You can copy these source files into the site packages folder under a suitable folder (e.g mqtt-sn) or alternatively set the path in your scripts to access the client.

The MQTTSN.py handles the packet packing and unpacking, and you don’t need to edit this.

It has a very important function right at the end called unpackPacket() shown below:

This function extracts the message Type from the received packet and calls the appropriate function to decode the packet.

Note: objects is a list of message type names and is just above the function.

The function is called from the MSQTTInternal.py script.

The MSQTTInternal.py script handles the incoming packet in the receive function.

The receive function is called as part of a loop or can be called manually.

This is the loop() as per the MQTT client

This file also has two important functions at the top. They are lookfor() and waitfor.

Note: You need to do a lookfor before a waitfor or the waitfor will always fail.

The observe if statement which is part of the receive decides if the message type just received matches what we are looking for.

Underneath you will see a collection of if, and if else statements which look for packet type and then call the appropriate callback function if available

The main file is the MQTTSNclient.py file.

The file has two classes the callback and the Client classes.

You will need to include it at the top of you scripts using:

Note : MQTTSNclient is the file that contains the scripts.

The following script subscribes to a topic and publishes messages on the same topic and displays the published and received messages.

We start with the imports.

Notice the sys.path call which you will need to set depending on where you place the MQTT-SN client files.

Now we create the connection: 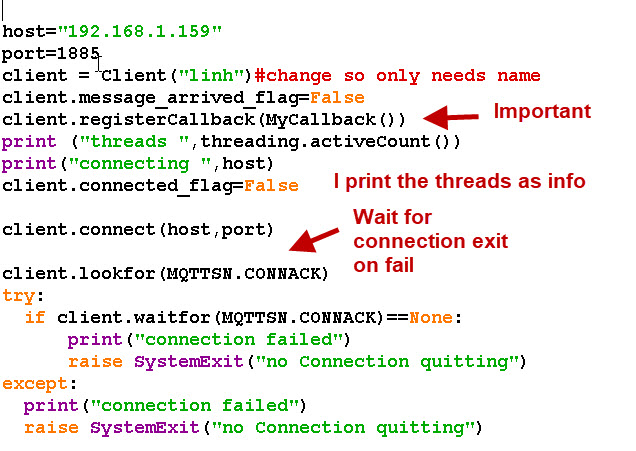 Notice the use of lookfor() followed by waitfor().

This follows the same style as used in the MQTT client and so you could use the following to replace the lookfor and waitfor sections. 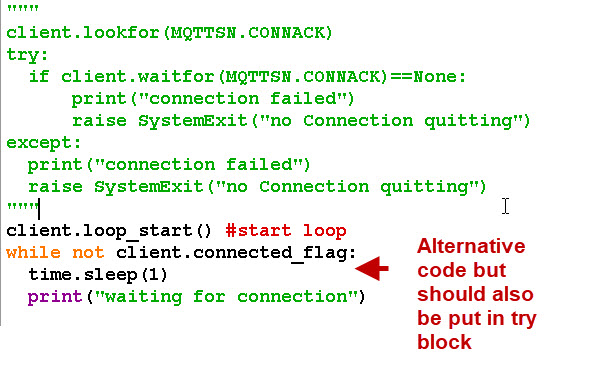 I’ve shown the alternative code using the flags that are set in the callback functions as per the mqtt client.

The following methods are available along with the parameters:

Connects to a broker. Clean session has the same meaning as MQTTv3 and means that the state is stored on the broker and the client can reconnect start with the same state.

The will is a flag and when true tells the broker to request a will topic an message from the client.

Dis-connects from a broker. No parameters

Subscribe to a topic by long name,short name or topicId. This is a blocking function as it waits for a suback message and returns the topic Id and a return code (0=Success)

This makes the on_subscribe callback redundant. I implemented it this way as it makes no sense proceeding until you have the topic ID and the topic ID is returned by the suback so we wait for it.

UnSubscribe from a topic by long name,short name or topicId. This is a blocking function as it waits for the unsuback message.

It returns a message Id

Register a topic by long name. This is a blocking function as it waits for a regack message and returns the topic Id and a return code (0=Success)

Publish a message using a topic ID or short name. QOS (0,1,2). Retained flag will tell the broker to keep this message until overwritten.

Publish with qos 3 or -1. This doesn’t require a connection and is ideal for sensors. The QOS is fixed at 3 or -1.You need to pass in the host and port.

Look for a message type. The message types (taken from the specification) are shown below: 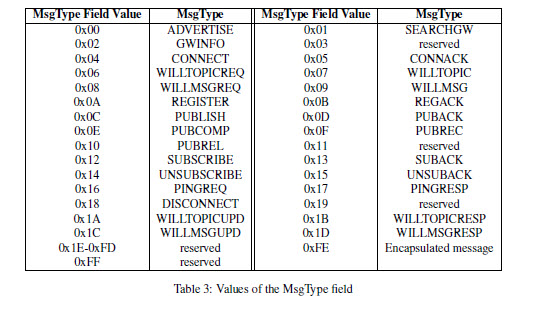 The lookfor is used in conjuction with the waitfor to wait for an acknowledgement message.

waitfor( msgType, msgId=None)
Blocking functions waits for the message type and must be proceeded by a lookfor.
When using lookfor/waitfor callbacks are not used.

Set a gateway to active or inactive. gqid is a number and the id of the gateway.

Adds gateway to a list of gateways. Called when the client receives an advertise packet or a response to a search gateway request.

search for a gateway. Parameters are the multicast address and port.

The response is a GWINFO packet

Used to register callback class. Must be used when using callbacks

This is used to run the loop manually.

Start the gateway (muticast)loop. If you are using any of gateway discover methods then this must be called.Starts a new thread.

Stops the multicast loop and must be called at the end if loop_start_gw() has been called.

Start a loop and must be called to process incoming messages UDP messages.Starts a new thread.

Stops the loop and must be called at the end if loop_start() has been called.

Set will message and topic. Parameters are

Update will topic. Parameters are

Update will message . Parameters are

will_msg=The message to be sent

The callback functions are defined in the MQTTSNclient script but can be overridden in the script by sub classing the callback class.

To use the predefined Callbacks use:

The callbacks defined in the Callback Class with the parameters are listed below.

Triggered by an incoming CONNACK message. parameters are the client ,address of the broker, and the return code (see table below).

Triggered by the DISCONNECT message. parameters are the client, and there is an option duration which is used by sleeping clients.

Triggered by an incoming PUBLISH. Parameters are

Triggered by an incoming register message from the gateway/broker

Triggered by a PUBACK which is received when a message with qos=1 is published. The returned parameters are

The following is taken from the specification and should be read as the PUBACK is different for MQTTv3 in that it can be sent for all messages regarding of qos as it can contain a reason code.

Triggered when the gateway broker acknowledges receipt of the will topic message.

Triggered when the gateway broker acknowledges receipt of the willmessage message.

The following example scripts are included: