Arduino can be equipped with various sensors like temperature and humidity and you will have a need to send these sensor values over MQTT.

In this tutorial we will look at sending and receiving integer and float data over MQTT using string data and buffer data.

Sending the data using strings is probably the most common and the easiest.

To send integer data as a string we use the sprintf() function to do the conversion.

As an example to send a temp reading er would use the following code:

sprintf converts the integer and places it in the array msg_out which we pass to the publish method.

To send a float we would logically use the sprinf function but if we try we get a ? as it doesn’t support floats in Arduino. If you want to understand more about this then see this article.

which works OK as pointed out in the referenced article.

Program Logic controllers typically send data in binary buffers. So, for example the number 23567 is sent as a 16nit binary number (2 bytes) rather than 5 characters (5 bytes).

Although it saves on network data it is a little trickier to do.

On Arduino an integer is 16 bits (2 bytes) and a float is 32 bits (4 bytes) and the encoding in memory is little Endiness.

Using our temperature example to send as a 2 byte integer we use the following code.

Notice the 2 at the end of the publish. As we are sending a byte buffer we need to tell the publish how many bytes there are.

To send a float e.g our humidity reading we use the following code.

In this case it is more complex and requires a separate function. Again notice the 4 at the end of the publish as we are sending 4 bytes.

Note: I do not take credit for the code as it was gleaned from answers to questions on stackoverflow.

With the float The Endiness is the Endiness of the stored data which appears to be little. I discovered this as I create a node-red flow to decode the buffer and had to use Little. The code for the function node is shown below:

Demo code. The download is an Arduino sketch that illustrate the above.

Sends integer,long integer,float and double as strings and
sends integer and float as buffer subscribe to test/# to view.

The results are shown in the screen shot below which is obtained by using the mosquitto_sub tool to subscribe to the topic.

You should notice that when using buffers the displayed message looks like gibberish as it is not text data and so cannot be displayed correctly.

In addition to receiving text data in Arduino we need to be able to receive both integers and floats and use them.

Again as in the sending tutorial the integers/floats may be represented as strings or as buffer data.

Receiving integers and Floats as Strings

In this case our integer arrives as a series of numbers e.g 200 and then needs to be converted into an Integer.

To convert a string number into Integer we use the built in function atoi(). The code is simply

To convert a string float into a float that we can use in Arduino we use the atof() function.

The demo sketch below accepts humidity(float) and temperature(integer) readings and multiplies them together and displays the result.

Below is a screen shot of the result. 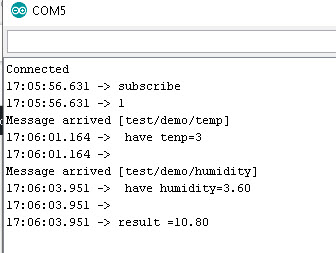 Receiving Integers and Floats as Buffers

To convert a 2 byte integer buffer into a 16 bit integer we use:

where  payload is a byte buffer.

To convert a4 byte float buffer into a 32 bit float we use a function :

Where the payload contains the input bytes.

Depending on the Endiness we may need to change the order and use:

1-Accepts float and int as text string on topics test/demo/humidity and test/demo/temp and multiples the values and displays the result to prove they are numbers.

2- Accepts float and int as  buffer on topics test/demo/humidity and test/demo/temp and multiples the values and displays the result to prove they are numbers.