In this tutorial we will cover the basics of IPv4 Addresses.

IPv4 uses 32 bits for addressing. The 32 bits are split into 4 bytes and each byte is separated by a dot(.). So it is of this form:

Where the value of a,b,c or d is between 0-255 decimal. A typical IP address appears like this:

An IP address has two components- A network component, and a node component. 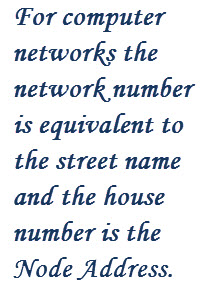 For computer networks the network number is equivalent to the street name and the house number is the Node Address.

The earlier implementation of IPv4 used address classes to divide the address space into network and node components.

This arrangement was very wasteful of IP addresses and was discontinued, but the terms Class A, B and C networks are still used.

The address classes divide the address space into addresses that support:

For Example Class A addresses would be used by large organisations (e.g. IBM) which had lots of computers (nodes) and so would require a large number of node addresses.

A class A address uses 8 bits for the network Address and 24 bits for node addresses. We can write this as:

Class B network addresses were for medium sized organisations and used 2 bytes (16 bits) for the Network and 2 bytes for node addresses.We can write this as:

Class C network addresses were for small organisations and used 3bytes for the Network and 1 byte for node addresses.

Class D and E are reserved

Here is a useful summary table taken from Wiki

How to Distinguish Class A, Class B Addresses

We need a way of distinguishing a class A address from a Class B ,C,D or E address.

The method used was to use the location on the first 0 bit in the the Most significant bits of the first byte. If the first bit is O then we have a class A Address.

This type of addressing is known as classful addressing and resulted in very wasteful IP address allocation.

It was replaced by a newer method called Classless Inter-Domain Routing (CIDR), .-See RFC 1518 and RFC 1519.

The division between Network and node was accomplished using a technique called subnetting.

Certain IP addresses are not routable on the Internet and are reserved for Internal networks, they are known as private addresses:

However due to the all 1s all 0’s rule then we can only have 254 possible nodes.

127.0.0.1 is commonly known as the loopback address, and is used for testing the local IP address stack. A packet addressed to 127.0.0.1 is not sent onto the network but only the IP software stack.

The most common form of addressing is unicast. In this form a message is sent to a single host using it’s IP address.

A broadcast message is sent to all hosts on a network or subnetwork and is created by setting the the node part of the IP address to all 1’s.

A sender sends a single message and all hosts on the network receive it.

Note: Broadcasts messages do not go through routers.

Multicasting lets you send message to a group of nodes. To receive a multicast message a node must register its interest. Muticast messages are sent using the Class D address range 224.0.0.0 to 239.255.255.255

Because of the way networks work having a single network with thousands of hosts isn’t practical.

It is equivalent to have a street with thousands of houses on it. Just imagine trying to get on to the street in the morning to go to work.

Therefore a technique called subnetting was devised that allows you to split a network into smaller networks know as subnets. – Subnets and subnet Masking explained.

IPv4 addresses use 32 bits are a written using dotted decimal notation. Address classes identify the network and node components of an IP address.