What is Subnetting ?-Subnetting is the process of diving a network into small networks and is a common task on IPV4 networks.

As an analogy imagine a school and we need to split it into class rooms.

But why split it into class rooms? The answer is to stop classes interfering with one another.

Now each classroom has a desk with a computer and we have been tasked with creating a labeling system for the computers.

Now say we have 30 classrooms each with a maximum of 30 students and computers.

If we assign numbers to our classrooms and computers then we could have for example:

We need two digits for the classroom which would allow for a maximum of 100 classrooms (0-99).

We need two digits for the computer which would allow for a maximum of 100 computers (0-99).

If we also say that classroom numbers 0 and 99 and computer numbers 0 and 99 were reserved and not allowed to be assigned then we now have a maximum of 98 classrooms and 98 computers which is enough for own requirements.

So lets create our label we could use the following scheme:

There are many possible permutations we just need to pick one and tell every one about out labeling scheme.

So now when we see the following 0223 we now know that this refers to classroom 2 and computer 23.

This we do easily in our heads once we know the labelling scheme.

We could even make it easier for ourselves by creating a paper mask that we put over the label that would reveal the classroom. 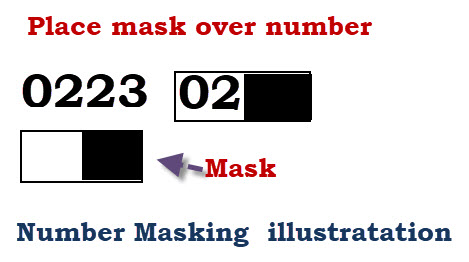 Just like in our classroom example an IP address is split into two components a network component and a node component.

In early IPv4 networks address classes were used to identify the number of bytes allocated to the network component.

The main classes were class A,B,C. With the allocation as follows:

To determine the class you needed to examine the most significant byte (far left).

All modern networks use the Ethernet data link protocol.

Ethernet uses a shared media and is negatively effected when a large number of nodes are connected to the same media.

This is just the same as having too many kids in the same classroom.

What would happen if you had a classroom with 100’s of desks i.e. hundreds of pupils?

So even though a Class A address can accommodate thousands of nodes it it totally impractical to put this many nodes on a single network.

The solution to the problem was to split the network into small networks called sub networks or subnets.

Take for example a class A address which uses 1 byte for the network ID and 3 bytes for the Node ID. Written

It is important to understand that the network part of the address is only used for routing IP packets on the public internet.

Once the packet enters the private network then the Node address is used and the public Network address is not used.

The technique used to create subnets is to use a Mask.

The mask effectively hides the Node component and leaves the network and sub network components.

If the IP address was printed on paper we could hide the last byte by placing a paper mask over the number with three holes. 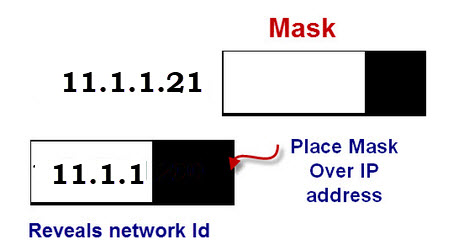 Note: if your binary is a little rusty see the binary numbers tutorial

To do this on a computer we use a number which we then logically AND with with IP address.

Here is the logic table for AND

and then do a logical AND

The Subnet mask determines how the IPv4 address is split.

Th example above used a class A IP address we can do the same with a class B address.

Subnetting on a byte boundary is the easiest to do and understand but we can also subnet on non byte boundaries.

1- You have been allocated a class A network address of 29.0.0.0. You need to create at least 20 networks and each network will support a maximum of 160 hosts. Would the following two subnet masks Work?

Yes both would work.

2. – You have been allocated a class B network address of 135.1.0.0 and and need to create 4 subnets each with around 200 hosts what is the easiest mask to use to satisfy the criteria?

We need to accommodate around 200 hosts which requires 8 bits which we have.

We need 4 subnets which requires 4 bits and we have 8 bits. So we have more than enough.

Classless Inter-Domain Routing was introduced in 1993 to replace the classful network design.

In CIDR notation this is designated by a /24 following the IP address. So:

The best way to learn to do subnetting is to try some examples. We will look a some common subnetting problems that arise when creating networks.

2- You have been allocated a class A network address of 21.0.0.0. You need create at least 10 networks and each network will support a maximum of 100 hosts. Would the following two subnet masks Work.

A2- Yes you only need 8 bits for 100 hosts and both subnet masks would give you that.

So far we have been subnetting on a byte boundary using class A and B addresses.

Now we are going to look at how we subnet on a non-byte boundary using a Class C Address.

You need to create 5 sub networks each network has a maximum of 10 hosts.

We can only use the first 8 bits for out subnets as these 8 bits have been allocated as host addresses.

Below is a simple subnet table that makes it easier for calculating subnets. 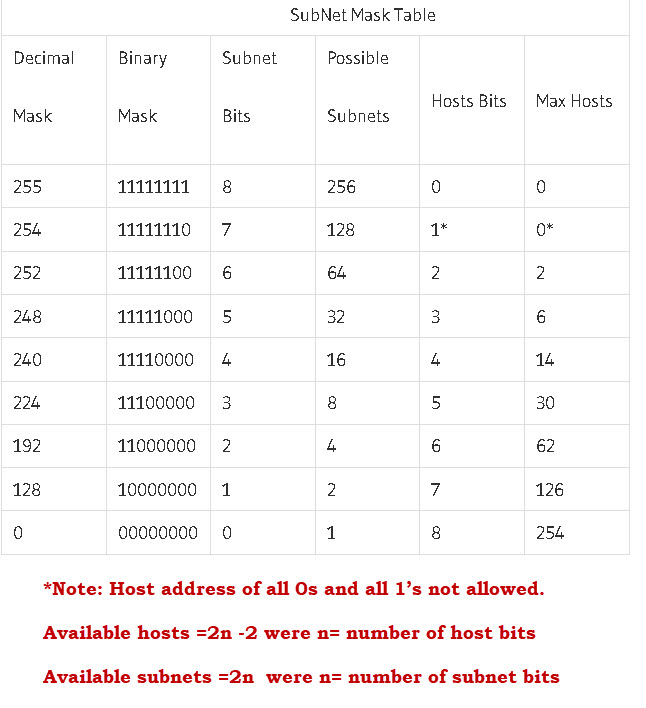 There are also many online subnet calculators available like this one