The Raspberry Pi has 40 General purpose Input/output Pins (GPIO) that can be used for controlling external hardware.

There are  a number of add-on boards called hats which plug into these pins and provide various sensors. The most common one being the sense hat.

Although you will need external hardware like leds etc for various projects there is a lot you can learn without using any.

In this tutorial I will cover the basics of using the GPIO pins and show you how to use MQTT to set the pin state and report the pin state using Python..

This aspect I found very confusing at first as there are two systems that are used, and you need to choose which one to use in your scripts.

GPIO4 corresponds to Board Pin number 7 as shown in the diagram below: 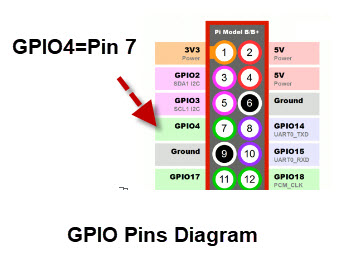 There are two modules that can be used for controlling i.e reading and writing to the pins. They are:

Both modules are normally installed but the install procedures can be found on the reference pages above.

To use you will need to import them. The code is

To use a pin you need to first set the numbering scheme and then designate the Pin as either an input or an output pin.

Using the BCM format we use:

to set a pin as an input pin use:

You can read the value of a pin using:

Note: GPIO.BCM,GPIO.OUT etc are constants and pins are often called channels when using the BCM scheme.

The following script demonstrates the above:

To publish the value of a pin we first need to decide on a topic naming scheme.

To set the value of the pin we also need a control topic.

To publish on pin/channel 4 (GPIO4) we use

The script below is available as a download and will let you control an output pin/channel using MQTT.

will set the pin/channel to 1.

So you can subscribe to this topic and see it change as you send the commands.

I created this tutorial as a response to a question I received. I never intended to use the GPIO pins myself. Therefore I would be grateful for any feedback you may have.