The Internet of things (IOT) will utilize the existing networking infrastructure, technologies and protocols currently used in homes/offices and on the Internet, and will introduce many more.

The purpose of this tutorial is to give you a quick overview of what networking and application protocols are likely to be used to build the IOT.

Note: You should have a understanding of basic Networking and Networking technologies before you continue.

The IOT will run over the existing TCP/IP network.

The diagram below shows a side by side comparison of the Internet protocols currently in use and those that are likely to be used for the IOT. 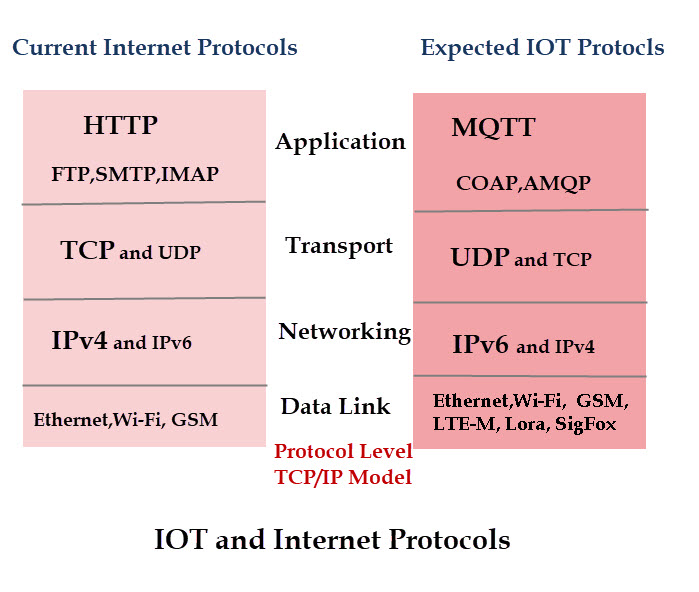 1. I have used larger font sizes to depict the protocol popularity. For example IPv4 is larger on the left as it is far more popular on the current Internet. However on the right it is smaller as IPv6 is expected to be more popular in the IOT.

2. Not all protocols are shown.

3. The areas that are showing the greatest activity are the datalink (levels 1and 2) and application layer (level 4).

4. The network and transport layers are likely to remain unaltered.

At this layer you will have a requirement to connect devices that are nearby e.g. on Local networks, and that are more distant e.g. Metropolitan and wide area networks.

Current computer networks use Ethernet and Wi-Fi at this level for home/office networking (LANs) and 3G/4G for Mobile connections (WANs).

However many IOT devices, like sensors, will be low powered (battery only).

Ethernet isn’t suitable for these applications but low powered W-fi and low powered Bluetooth are.

Although existing wireless technologies (Wi-Fi, Bluetooth,3G/4G) will be used to connect these devices, other newer wireless technology, especially designed for IOT applications, will also need to be considered, and will likely grow in importance.

The protocol that is set to dominate at the networking level in the long term is IPv6.

It is very unlikely that IPv4 will be used, but it may play a role in the initial stages.

At the transport level TCP has dominated the Internet and the web. It is used by HTTP and many other popular Internet protocols (SMTP, POP3, IMAP4 etc).

MQTT which I expect to be one of the dominant messaging application protocols currently using TCP and is already deployed.

However because of the requirement for low protocol overhead I would expect UDP to feature much more in the future IOTs.

MQTT-SN –which runs over UDP is likely to see more widespread use in the future.

There are currently two main protocols being actively used at this level.

They are HTTP and MQTT.

HTTP is probably the best known protocol at this level as it it the protocol that powers the Web (WWW).

HTTP is also going to be important to the Internet of things as it is used for REST APIs which are becoming the main mechanism for Web Applications and services to communicate.

However because of the high protocol overhead HTTP is not likely to be a major IOT protocol, but will still enjoy widespread usage on the Internet.

MQTT (Message Queuing Telemetry Transport) has emerged as the main IOT messaging protocol because it is lightweight and easy to use. See an Introduction to MQTT for beginners

HTTP vs MQTT for IOT

MQTT is fast becoming the de-facto standard for IOT applications.

This is because it is very lightweight and fast when compared to http and is a one to may protocol as opposed to a 1 to 1 protocol (http).

There are many current web applications that would have used MQTT as opposed to http if had been available when they were being developed.

A good example is when information needs to be sent to many receiving clients like in train/bus/aircraft arrivals and departures.

In this scenario a 1 to 1 protocol like http has a large overhead and places lots of load on the web servers.

Scaling these web server can be difficult.

With MQTT the clients only connect to a broker and it is easy to add additional brokers to balance the load.

Other references:See MQTT vs HTTP for IOT.

Almost all IOT platforms support HTTP as well as MQTT.

However there are other protocols which are worth considering and are listed below along with links to their wiki page.

This article covers the main protocols and their main uses.

The conclusion of this articles seems to be that the IOT will consist of a collection of protocols depending on their intended use.

However if you look back to the early days of the Internet HTTP was just one of many protocols, but it has become the dominant one.

I expect  IOT messaging protocols will follow a similar pattern with most of the services using 1 dominant protocol.

Below are the Google trend charts showing how the popularity of MQTT, COAP and AMQP has changed over the last few years.

The areas that are showing the greatest activity are the datalink (levels 1and 2) and application layer (level 4).

The network and transport layers are likely to remain unaltered.

At the Application level messaging protocols will be used for Interconnecting IOT components.

Although we are still in the early stages of IOT adoption it is likely that the Industry will consolidate around 1 or possibly 2 messaging protocols.

Over the last few years MQTT has emerged as the most popular, and is the one I’m currently focusing on on this site.

HTTP will also continue to be used as it is already well embedded in current IOT platforms.