In this mini workshop we will be creating a device in Python that can be controlled using MQTT.

Although our sample device is a simple sensor I have used the same idea and similar code to add MQTT control to Python command line control scripts.

We will start the workshop by designing a topic structure and then we will create the Python code.

Before you start it is important to decide on a topic structure.

The structure I normally use for commands looks like this:

Notice the device_command at the end. This is the actual command you want to issue to the device e.g power to turn the power on/off or timer to set the time.

In a simple case were the device can only accept a single command the device_command can be omitted.

In addition the device might also send status data and readings which in turn would use their own topics e.g.

You should notice the topic structure is chosen as it allows you to subscribe to the topic base and receive all data and then to easily filter commands from responses.

Most IOT devices will come with a device ID which can’t be changed and uniquely identifies the device.

When setting up the device then it is common to assign and use a friendly name that is more descriptive e.g main light.

A device can also have an alternative name which allows you to control the device in case something happens to the original friendly name. For example if a device rename goes wrong.

It is common to group devices into control groups so that you can, for example, turn all lights off and on with a single command.

Command in Payload or Topic

To turn our lights on/off we could issue the command value as part of the topic so we would have the structure:

Alternatively the command can be sent in the payload.

Simple data can be sent in the topic but more complex data like JSON data is sent in the payload.

In this workshop we will implement both methods but we start by using the topic.

The response contains the command in the payload.

The python code needs to:

Analyse the received topic and extract the device, device command, and command value .

Check that the command is valid

Execute the command, and update the status and send a response.

The Message hander extracts the various elements from the topic and checks that the command value sent is valid.

If valid, it calls two functions. These functions update the  status and send a response.

The functions are shown below:

You should note that the code currently doesn’t check the device name and so it will work for any device name.

It will also work with a device_command and without one.

The house/connected topic is not mandatory but I use it so that it is easy to identify connected clients by simply subscribing to this topic.

The device publishes a retained message  (value=1) on this topic when it connects.

Before it disconnects it should publish a 0 on this topic. For completeness the will message should be set to do this when the connection fails.

The sample code is available below:

I prefer to use the mosquitto_sub and pub tools for testing but you can use MQTTBox or any other tool of your choice.

You will need to subscribe to house/# to see the commands responses and status messages.

You then publish on

To turn the light on  and use off to turn it off. These states are checked in the code but the case isn’t important. Example below:

In the case of a simple sensor there will be only a single name but as mentioned earlier we will have an hard coded name and friendly name and also  group names.

So we will start with hard coded values.

Before updating the status and executing commands the device name needs to be checked. The function is shown below

Besides simply turning the switch on and off we might want to add the switch to a group or change its name.

For each command we will need to create a function. Below is the code for three functions:

To change the friendly name we need to add another command which we will call change_name and to change it we set the value to the new name so we have a command of the form:

In the message handler we need to extract the command and call it if it is valid.

The message handler function has been re-coded to do this and note that we only need to look for the command if we have the required topic fields. 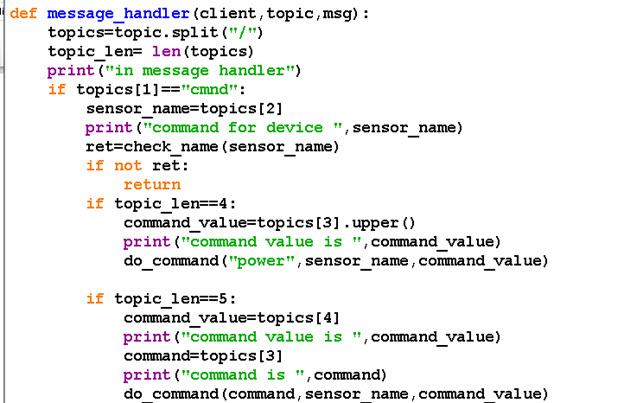 The do command function checks and calls the command if it is valid.

The complete code is in the file demo-sensor2.py and you should now be able to change the friendly name and change it back again.

Questions That you can answer by trying

Q1- Can you change the sensor name using the device name

Q2- Can you change the sensor name using the group name

As it stands the workshop should give you the basics of device control that you can experiment with and develop further.

If you would like me to develop this workshop further then you can let me know by completing the poll below.

Could please complete the poll below: